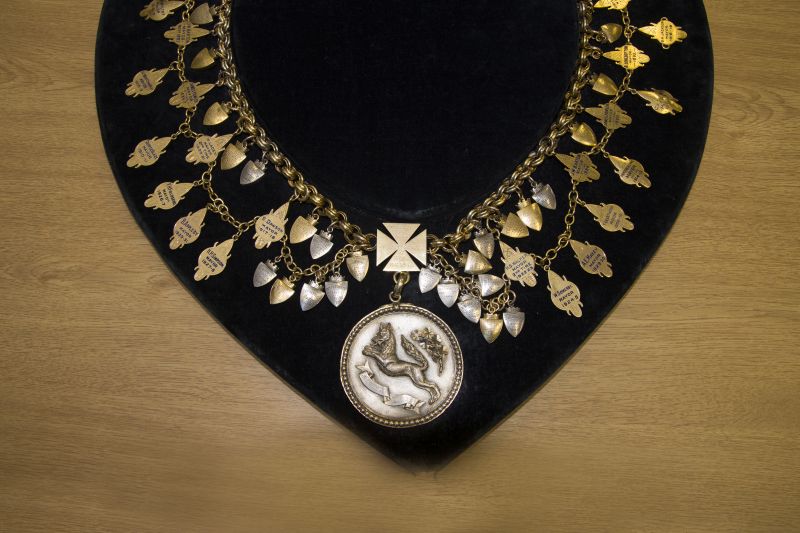 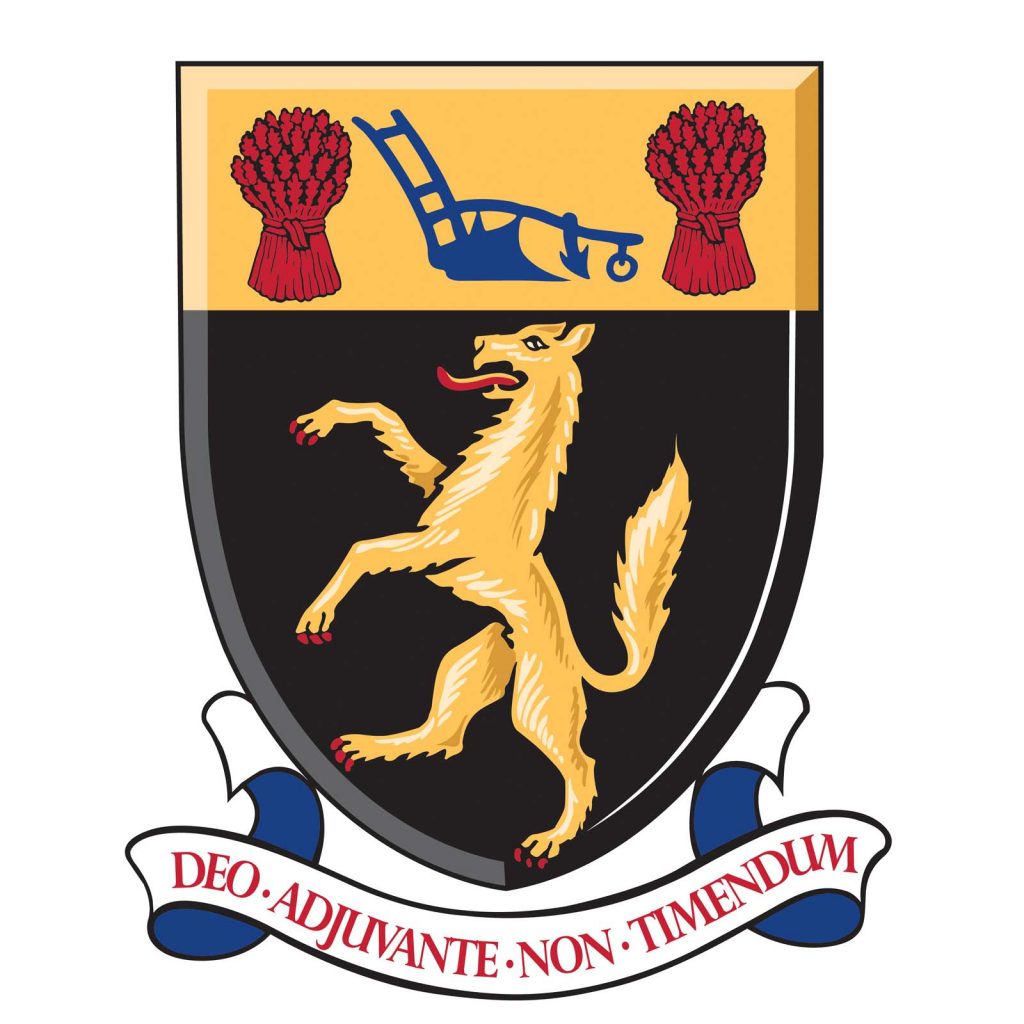 Arms: Sable a Wolf rampant Or on a Chief of the last a Plough turned to the sinister Azure between two Garbs Gules.

Motto: ‘DEO ADJUVANTE NON TIMENDUM’ – With God’s assistance there is nothing to fear

Granted 8th June 1954 to the Louth Borough Council. Transferred by order in Council 1976.

The golden wolf on a black background was used by the former Borough of Louth, which came into existence in 1836.

It is believed that is was originally used by Nicholas de Luda in 1351. He was a clerk to Edward II and had a long ecclesiastical career.

Hlud was the Saxon name for Louth which originates from the 5th and 6th century. Hlud means ‘loud’ and relates to the River Lud, although the River Lud was not named until quite a bit later.

The wheatsheaves and the plough refer to the Town’s association with agriculture.

The Maces used by the Mayor’s Sergeant

First of all the mace that was given by Fowler. This is 36 in long and at the top it says “Jubilee year of the reign of Her Majesty Queen Victoria 1887”. Beneath that there is the wolf rampant on one shield and the Royal Coat of Arms, on the other with “Honi soit qui Mal y pense” and “Dieu et Mon Droit” and then further down the stem of the mace it says in blue “The Mace of the Borough of Louth”. It has two intertwined initials a J in blue and a F in red and the following inscription:- “Presented to the Burgesses of the Borough of Louth by James Fowler FRIBA Mayor 1874-75-80 and 86 and Alderman of the Borough, as a memorial of the Jubilee of the reign of Her Most Gracious Majesty Queen Victoria AD 1887”. The whole thing is highly decorative and within the head of the mace is a sunburst design with the intertwined letters VR. According to a label within the cabinet this mace previously described is gold plated and weighs about 6 lbs.

The large Mace is 54 in long and again according to the label weighs about 14 lbs. The head is much more ornate and it has a red velvet cover within the crown. On a shield beneath it says:- “Presented to the burgesses of Louth on the coronation of his Imperial Majesty George 5th King of Great Britain, Ireland and the Dominions beyond the Seas, Emperor of India, June 22nd 1911 by Councillor Thomas Gelsthorpe, Mayor 1910”. On the same level is the hallmarking and then on the other side the Borough shield of Louth with the wolf rampant in black on a yellow enamelled background and the motto “Florent Luda”. A level below that is the Royal Coat of Arms with an enamelled badge in the centre in red and blue with “Honi Soit qui Maly Pense” around the edge and then the motto “Dieu et Mon Droit” in gold beneath. The stem of the mace is highly ornate with a twisted design bearing the English rose, the thistle of Scotland and the shamrock of Ireland. On the encircling projection halfway down the stem are the words “Coronation of King George V” and then around the rim of the bulbous lower section “The Mace of the Borough of Louth”.

The first Mayor’s Robe one is by Eade and Ravenscroft of a heavy red flannel, the front sections are lined, the back is very deeply gathered into the shoulder section, around the shoulders and down the front edge is trimmed with brown fur and the sleeves are again constructed with a front section shorter than the back trimmed with fur and with black velvet and the sleeve continues round into a caped section towards the back. The fur on this item shows a considerable amount of moth damage. Five lengths of red braid are attached loosely around the shoulders as decoration and the garment closes with six pairs of black hooks and eyes down the front edge.

There is a second similar red robe of rather thinner felt material this time and with the yoke lined with a heavy cream silky fabric. The makers name has actually been removed from this. The gathering and styling is very similar to the previous item except that in this case there is an inner trim down the front edge and up around the collar of black velvet and this fastens with three pairs of hooks and eyes. Whilst the fur on this one is in better condition, it is not in fact such good quality as on the previous garment described.

The fur on mayoral robes is musquash from the musk rat, a N. American rodent. The robes were made between 1941 – 1952 and this is the type of fur generally used at that time.

The heavy black grosgrain robe made by Eade and Ravenscroft Ltd, Robe Makers of Chancery Lane, London is the Town Clerk’s Rob. This is trimmed with black velvet and has very ornate sleeves with a black velvet section at the shoulder, a shorter length to the outer part of the sleeve with a split with rows of tasselling and then the rows of black tasselling continue on the back of the sleeve section. The black velvet collar continues on the back into a square shape and the back of the robe has a deep split at the base which is again surrounded by the black braid and tasselling.

The Civic Chain, which is worn with the Robes, only when the Mayor’s Sergeant is present, consists of a central star and main medallion and surrounded by 64 medallions, each engraved with a year and the name of the Mayor at that time.

The Mayor’s Lounge Chain (see photo of Mayor in suit) is worn when the Mayor’s Sergeant is not present. It is worn with a lounge suit instead of the Robes. This chain displays the town’s crest with the chain mounted on a velvet ribbon and was recently refurbished in 2019 by Thomas Fattorini Ltd.