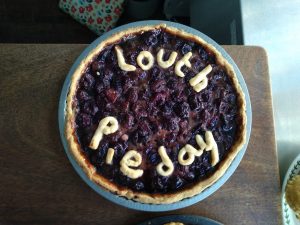 A small market town in the Lincolnshire Wolds Area of Outstanding Natural Beauty became – for a few hours at least – the ‘Pie Capital of the World’, with locals and visitors flocking into town for Louth Pie Day. Pie shops said they sold three normal weeks’ worth during a one-day festival of pies. Members of the public voted for their favourites from around 50 types of pies on offer across eight pie shops and cafés from 10:00 to 16:00 on Wednesday 3 April. The People’s Choice Trophy, voted for by people following the Louth Pie Trail, was won by  The Toadstool Café on Queen Street. The Toadstool Café had the two top pies, each with an equal number of votes: St. Clements and Chicken and Leek.

Honourable runner-up was Meridian Meat’s Steak and Stout pie, which received the same number of votes as each of Toadstool’s two, but competitor consensus was that the Toadstool Café should win as they had two pies in the three-way pie tie – and the Louth Pie Day events team agreed with them!

Louth already has an excellent reputation for high-quality and independent food shops. Eight of the town’s artisan pie makers – butchers, bakers and cafés – became official stops on the very first Louth Pie Trail. They geared up with extra staff, extra-long shifts and working through the night before Pie Day, as well as more baking throughout the day to meet demand. Despite this, the event drew so many visitors that some pie stocks were running low as early as 10:30, just half an hour after the event started. Several pie shops sold out of popular pies before 13:00; three cafés sold out completely by the end of the day.

Louth Pie Day drew visitors of all ages. A total of 31 children from Limes Play and Learn walked into town in three groups, exploring the town and pie shops to exchange their vouchers for slices of pie. They were invited behind the scenes at Meridian Meats on Eastgate find out how the jelly gets into the centre of a real pork pie.

Queues ‘out of the door’

The overwhelming response to the first Louth Pie Day – from members of the public and from the businesses involved – was that it was a huge success. Some pies were so much in demand that they ran out before everyone had had a chance to try them. But with queues stretching out of pie shops and along the streets at peak times, some traders in this small market town enjoyed the busiest and most enjoyable Wednesday market day for a long time.

Jim Sutcliffe from Meridian Meats said: “It was incredible day. It surpassed everything we thought it would, we were flat out all day long.” He likened the mood in the town as ‘like Christmas’ with a fantastically cheerful and friendly vibe. “We actually had people who bought pieces of pie for lunch with their pie vouchers, then came back later in the day to buy a whole one to take home because they enjoyed it so much.

The town’s festive menu included sweet and savoury traditional pies, heritage pies, vegan, vegetarian, and gluten-free pies and pasties. More than 2000 slices of pie were served hot and cold, to take away, and at cosy café tables throughout the town in exchange for Louth Pie Day vouchers. Not everyone ate their pies in the street, many gathered them to take home for a pie feast.

Participating shops were butchers Lakings of Louth, Meridian Meats, and Woolliss & Son; baker Pocklington’s Bakery; Smiths Pie & Mash Shop; cafés Tertulia; The Green Cottage Tearoom and The Toadstool Café. Three other locations became ‘pie stops’; Trinity Centre community centre and two pubs, the recently reopened Boar’s Head pub and microbrewery The Consortium, invited pie lovers to bring in their pieces of pie to enjoy with a cuppa or a drink – and a chat.

Hugely exceeding expectations, the pie-loving public got behind Louth Pie Day to support Louth’s small independent businesses, and the event drew extra visitors to the town from across the county. There have already been calls to make it an annual event. The highly social initiative was conceived and organised by pie lover Kiat Huang, who adopted Louth as his home town two years ago. He wanted to highlight the town’s reputation for high-quality and independent food shops. Kiat (and a small team of volunteer PR and event professionals from Louth) together with the participating pie shops, created a real buzz and sense of excitement on social media – there is even a Louth Pie Day playlist on Spotify. The event was covered live on BBC local radio throughout the day. The moniker ‘Pie Capital of the World’ was cheekily coined by BBC Radio Lincolnshire’s breakfast show presenter Scott Dalton.

“It was a real success. It was lovely to see the independent shops working together, and people going into shops that they had not visited before. Louth people and Louth businesses told me they would love to do it again,” said Kiat Huang, and said he thought the idea could be emulated by other small towns with their own speciality or something that they collectively do well, like arts or crafts or food. “From the seed of an idea and very positive feedback from a few businesses and friends grew the idea of a feasibility study amongst local pie-sellers. Then once a critical mass of early adopter businesses signed up, it was all systems go! We quickly developed a framework for the event, and set the wheels in motion. There was already overwhelming interest in doing it again. It’s great that to know that an event like this can be successful with local  businesses working together with a set of passionate volunteers with complementary skills.”

In addition to the People’s Choice Trophy which was up for the public vote, three guest judges followed the Louth Pie Trail to give their expert verdicts. Each nominated their Judge’s Choice pie shop.